Conventional vs. Organic Chocolate and Coffee 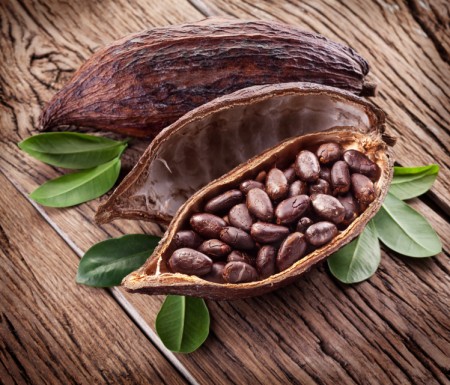 When it comes to fruits and vegetables we often condone conventional choices for produce if we remove the outer skin/husk.  For example, foods like conventional oranges and bananas are considered safe to eat partially because we don’t eat the skin.  So, with that being said, should we assume the same goes for coffee and chocolate considering the outer skin/fruit is removed and we only consume the bean/seed?

Knowledge is power so we decided to investigate. First, we needed to understand how coffee and chocolate were grown and harvested.  Both are fruits.  Their trees flower then fruit and the fruit is harvested and processed to remove the inner seed or coffee/cocoa bean.

We wondered, how was conventional vs organic cocoa treated during it growing season? One of the most shocking discoveries was to find out that conventionally grown cocoa is one of the highest pesticide-using crops out there. Conventional cacao tree cultivation uses more pesticides than any other factory farming process except cotton, according to some reports.  And in addition to using synthetic pesticides, herbicides and fertilizers, many non-organic chocolates, once processed contain high fructose corn syrup, wax, artificial flavors and colors, and other unappetizing non-food ingredients.

Purchasing organic coffee is pretty important as well – especially if you drink it every day. Conventional coffee beans are produced similarly to cocoa, with a slew of chemicals.   They are often imported from countries with weak laws on pesticide use. Most organic coffee also carries a “Fair Trade Practices” label, which means that the people who grew the beans were paid and treated fairly. The above statements also apply to chocolate, whose raw ingredients (cocoa beans) are also grown in countries with less-stringent pesticide and labor regulations than the U.S.

But what about the fact that the outer fruit is removed? The World Watch Institute reports that most cocoa is grown in West African countries and that lindane is the most commonly used pesticide in the region.  Yahoo Green reported a study of conventional chocolate products found tiny amounts of the pesticide lindane. The Environmental Protection Agency says lindane has been shown to cause a variety of toxic effects on animal subjects.

What about coffee? In the early 19080’s the Natural Resources Defense Council retained an outside contract laboratory to conduct independent testing on imported coffee beans. The analysis revealed multiple pesticide residues on all green (husk removed) coffee bean samples. The roasting process may reduce pesticide levels but by how much is not know.

Conclusion: Information is inconclusive as to whether pesticides penetrate the husk around both coffee and chocolate beans.  However, there are some things to consider when deciding whether or not to buy organic:

The countries traditionally harvesting these crops may not have the same pesticide regulations at the United States.

Conventionally grown chocolate is one of the highest pesticide-using crops.

Some brands of conventional chocolate may also be using added ingredients, such as high fructose corn syrup, wax, and artificial flavors and colors.

As a result, if you tend to eat/drink these foods frequently, you might want to consider switching to an organic product.  However, if these foods do not show up regularly in your diet, it may not be worth the added expense. Instead, choose organic variations for the foods you eat on a daily basis.